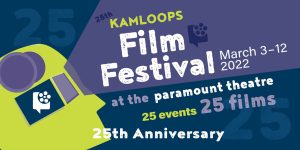 The Kamloops Film Festival is back again, celebrating 25 years of films and fun!  This year’s lineup includes 25+ international, Canadian and local films, with something for the whole family to enjoy!  We’ve got screenings, film discussions, and 25+ special events!  All films are shown at the Paramount Theatre in downtown Kamloops. Don’t miss out on the Thompson-Nicola region’s most popular film festival! For more details on the film schedule, tickets and festival passes visit kamloopsfilmfest.ca.  Find us on twitter @KamFilmFest and on Facebook at Kamloops Film Festival.